Time flies - can't believe it's been a month and it's time to release 0.5.3. It's nice to be able to share what's happening more frequently!

Onivim now supports rendering inline elements between lines of code - and we use it in Onivim 0.5.3 to implement CodeLens, which is contextual information interspersed with source code.

It's particularly useful for working with ReasonML or OCaml, because those extensions show the type signatures that are being inferred, as you edit:

Having that live type inference for those languages is a tremendous time-saver!

However, there are several other extensions that use CodeLens, too. For example, the bundled JavaScript & TypeScript extensions can show reference counts for functions and classes:

In addition, language extensions like Elm use CodeLens to show reference count, as well as which functions are part of the public interface: 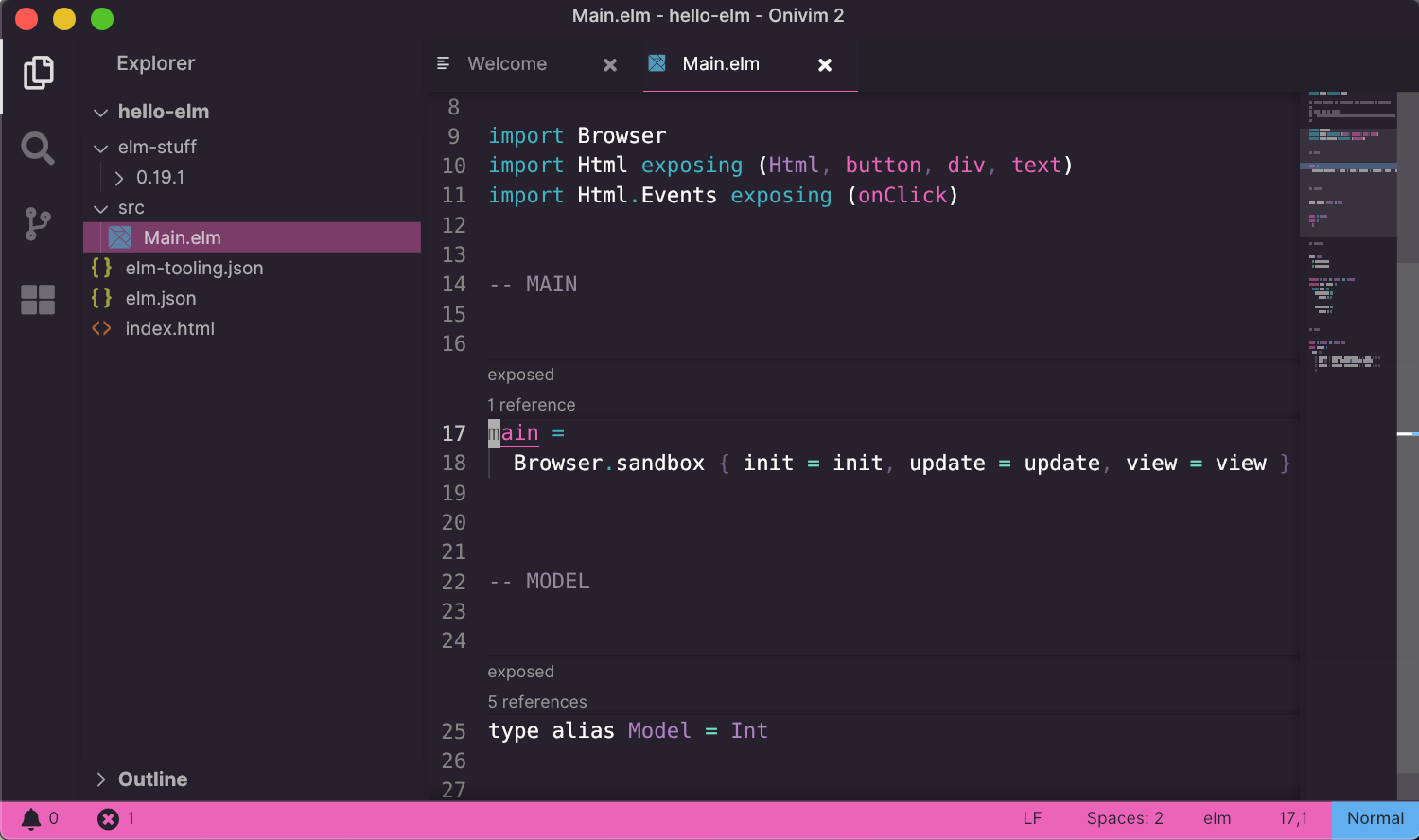 This is a feature that I had always wanted in Onivim v1, but never could get quite right. In Onivim v1, we were constrained to the editor model as a terminal-grid-of-characters - this makes it quite tricky to bolt-on rendering this interspersed contextual information. However, because Onivim v2 handles the complete rendering pipeline for the editor surface, and is decoupled from the editor being modeled as a terminal-grid-of-characters, it becomes easier, or at least tractable, to implement.

Even still, there were many challenges with performance, with animation, with aligning the viewport to minimize 'jerk', and CodeLens touches many other features such as word wrap and scrolling. In particular, our function that maps 'buffer position' (a line and a byte) to 'pixel space' needed to be updated to account for inline elements like CodeLens taking up space (and be quick to calculate when changed, as occurs when the inline elements animate open).

It's an exciting feature, though, because the infrastructure for these inline elements is fairly general - meaning Onivim can potentially render arbitrary UI in between lines. I'm looking forward to building on this foundation in the future to implement other features, like an inline diff view, or a keyboard accessible 'peek view' to show references or slices of code from other buffers, without needing to leave your current buffer. Let me know if you have ideas!

Some users may find this feature distracting, though, so you can turn off CodeLens by setting:

Finally... Onivim has a menu bar on all platforms!

On OSX, we integrate with the native application bar:

And the feature is also available on Windows and Linux, using a custom-rendered menu bar: 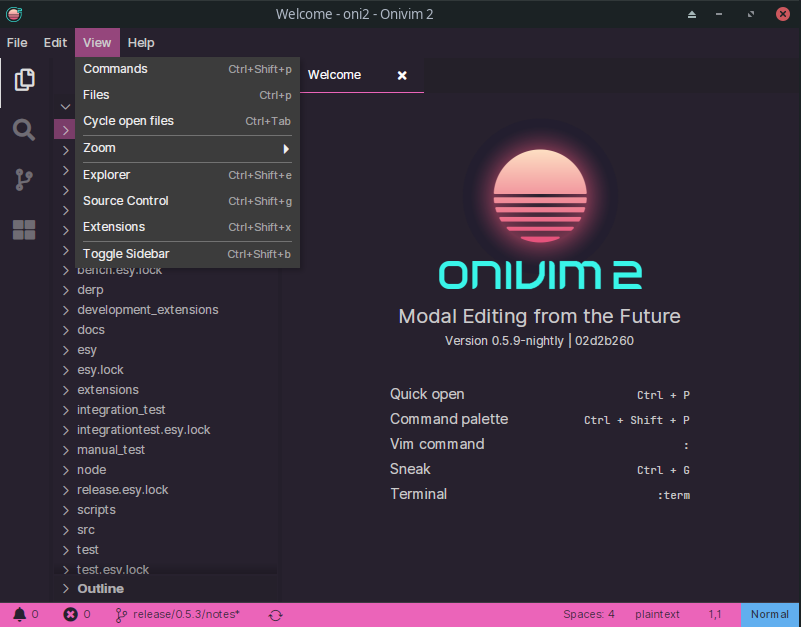 It's pretty spartan at the moment... but it provides the infrastructure necessary to add more commands.

The menu bar is on by default, but it can be turned off on Windows and Linux with the following configuration entry:

Thanks to @zbaylin for all the work done to wire up the native OSX APIs to support this feature!

Preview mode, which is on-by-default, means that the tab for an editor is re-used when clicking on it via the file explorer (and for other views, like search). This is helpful for users who explore the workspace with the mouse, as it keeps editor tabs from cluttering up the split until they've settled on the right file to work with.

Thanks @fanantoxa for the awesome contribution!

In 0.5.3, the font weight for Onivim is configurable, courtesy of @marcagba! Another feature that has been a long time coming.

This is controlled by a newly added "editor.fontWeight" setting:

Thanks @marcagba for your magnificent work implementing this!

We've upgraded the extension host (from 1.51.0 to 1.52.1) - bringing us up-to-date with the Code extension host. Our goal is to be within a month of the official extension host, so that we can ensure that extensions stay compatible.

In addition, we've continued to fix blockers around extensions, notably:

We've also continued to fix issues in our Vim layer - here's a snapshot of some of the changes:

The full changelog can be found here: Changelog

For our 0.5.4 (March) build, we're still working towards the 0.6.0 goals on our timeline - in particular, the focus for 0.5.4 is integrating snippet functionality in the editor:

I'll look forward to updating you on the progress there next month.

Thanks for reading, and for helping us towards achieving this goal of "Modal Editing from the Future"! Your help, feedback, and support has been critical in allowing us to progress and push forward.