NOTE: This was the initial design document for v2 of Onivim, and is kept around for historical context. This was drafted prior to work began in earnest on the editor.

Maintaining and working with developers on Oni has been an incredible experience, and I'm amazed at how far it has come in the time we've worked on it.

Oni started out as a personal / hobby project for me - and opened the door to meeting and collaborating with some incredible people.

There are some things that went well, and seemed to resonate with developers:

And, there are also areas that Oni fell short, and didn't meet the goals we set out: 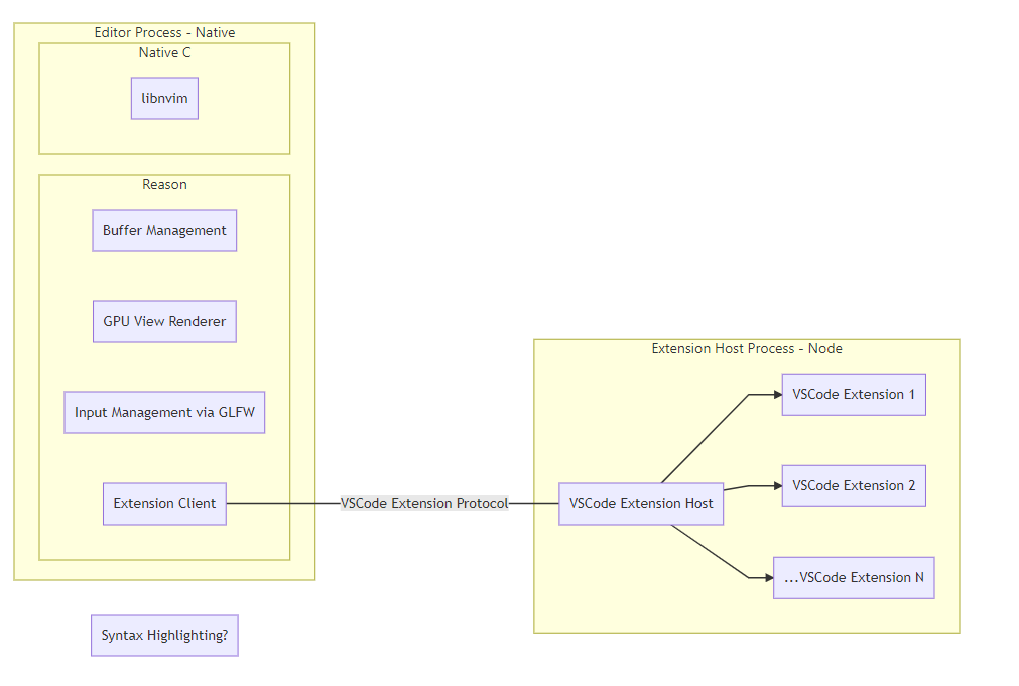 There were several specific features that were difficult to implement in Oni v1:

At the time Oni was started, Electron was the best choice for a small group of developers to build a cross-platform app. This can be attested to by the prevalence of successful Electron apps, like VSCode, Discord, Slack, Atom

Electron certainly has known downsides, but the upside is that it can enable a small group to quickly ship apps. JavaScript is one of the most popular languages - so an important benefit is that it always makes your project approachable to a wide audience. One particular upside is that, when working with Electron, you have a high confidence that the core app functionality is consistent across platforms (something you don't get from native widget frameworks).

However, times have changed - I believe there are alternatives now to Electron that can enable the same developer experience and productivity benefits, but without the performance tradeoffs that are necessitated with Electron.

For our prototyping, we will be leveraging Reason - a javascript-like syntax around OCaml - and a framework I'm developing called Revery - a high-performance alternative to Electron. I'm building this framework from the ground-up, based on what I've learned from cross-platform development - to create a framework that offers consistency across platforms along with native performance.

Why Reason / OCaml? For those unfamiliar, OCaml is a battle-tested, pragmatic, functional programming language. The OCaml compiler is one of the fastest, and the performance of the native-compiled code approaches native C. It's a great choice for the next generation of Oni!

One aspect of Oni's 'view' that caused problems for us over the course of development was the fact that Neovim treats the visible screen as a grid of cells. This makes it tough to know what is beyond the extents of the screen (necessary for smooth scrolling). A naive approach to simply tell Neovim to treat the viewport as larger is busted, because it breaks features like scrolloff

For Oni v2, one avenue we will be prototyping is decoupling our 'view' from the character-grid provided by Neovim. This provides several challenges, but it means that, if we control the rendering, we can easily implement smooth scrolling and scrolling decoupled from cursor position. In addition, it's straightforward to implement a minimap renderer.\

One particular pain point with Oni's model today is the integration with native Vim completion and macros, with its own language support. This came up in several awkward bugs (multiple pop-up windows, etc).

The downside with that approach, though, is that it means some insert mode plugins may not work as expected (or at all) in Oni. I'd be interested to know if there are any insert-mode features or plugins that you'd miss so we can make sure we account for that functionality in some way.

Oni v1 communicates with Neovim over stdio using the msgpack-rpc protocol. This is great, except this 'asynchronicity' was the source of many problems and additional (unnecessary) complexity - but it's complexity we had to deal with.

Most Neovim UIs use this stdio protocol - but there are a few exceptions, like VimR, that use an embedded C library libnvim. This is the approach that we plan on prototyping for Oni v2, because it's the fastest way to communicate with nvim. It means that several of our problematic async APIs can now be synchronous - which simplifies the downstream logic.

Having our core editor experience work directly with libnvim also opens up other possibilities to improve the deficiences in our prior architecture - for example, we can directly integrate with the completions in order to enable better macro support.

A mistake I made early on was to build an independent extension model for Oni. At the time, the VSCode extension implementation was too limiting for some of the functionality I wanted to explore.

However, the VSCode extension ecosystem is burgeoning with high-quality language support, including debuggers, that I would like to leverage for Oni v2. It's hard to bill Oni as giving you the best of VSCode and Vim if you can't install plugins from both places. In addition, VSCode has invested significantly in both their extension host model and the ecosystem of plugins, and has generously licensed the editor under a permissive MIT License, which makes it easy for us to re-use pieces in Oni.

In Oni v1, we already were leveraging some VSCode pieces - in particular, the snippet support and textmate highlighting, but I want to double-down on that investment.

Another barrier to entry for users migrating from Vim -> Oni is that they might find the aesthetics of a modern UI appealing, but they don't want all the cruft or they are concerned about conflicts with their Vim config. For Oni v2, we should consider an architecture where the node-host-extension-model is optional, such that there is a minimal version of the editor available that has a minimized set of conflicts. It's also useful to be able to put the 'full' version in this minimal environment, for debugging purposes.

A New Model for Sustainability

Making OSS sustainable is notoriously hard. For Oni v1, unfortunately, the funding model is not sustainable - we've had some incredibly generous backers who have contributed, but it's not enough for us to even have a single full-time developer. Projects like Atom and VSCode have tremendous amount of funding from their parent companies, but unfortunately Oni is not in the same boat.

Because of this, I plan on pursuing a dual-licensing model:

As a thank you to all of our existing backers and early adopters - anyone who has contributed financially to the Oni project prior to the end of 2018 - they will receive a license for lifetime commercial usage. In addition, active backers will receive early access to the binaries.

The market is so niche for a developer tool like this, so I don't anticipate it being a commercial success, but I would like to give back more to the contributors and to the open source projects we depend on. We had ~100k downloads in Oni's lifetime - if 1% of those contributed $25, that would be $25,000 over the course of Oni's lifetime, which is significantly more than we have currently. It's still not enough to be a full-time project, but there are potentially other avenus we could pursue as well.

One important core value to the project is to contribute back to open source. Therefore, we will push some of the funds to Neovim, Vim, and other open-source efforts that we depend on. I believe this is the only sustainable model for open source - sell products that then go back to fund the OSS dependencies.

Focusing on the right priorities

Another challenge with open source is, as the project becomes popular, it can be difficult and time-consuming to address every issue. This is feasible when a project is in early stages, but especially without funding or full-time support, it is not possible to keep up with incoming issues. At that point, it is necessary to introduce a 'triage' process - where we prioritize issues / work and decide where best to invest time. For Oni, we have a very minimal process - we tag backer-initiated issues with the 'insider' tag, but other issues can still consume attention and time.

Focusing our resources on the right set of work is critical - especially when resources are limited. To that end, I'm considering a more aggressive triage strategy - we will default to closing issues immediately (and tag them with 'backlog'), unless it was initiated by a user that has a license or an early adopter. This helps us focus on the right set of priorities because we will only have issues that are relevant to users that have already themselves made an investment in Oni.

This is critical in a small open source project - it's easy to bleed a ton of time just triaging issues, as opposed to doing work that could actually benefit users that have invested in the project!

The above document is optimistic and paints a rosy picture for this new architecture, as it should - otherwise it wouldn't be worth pursuing! However, there are several potential risks to call out as well.